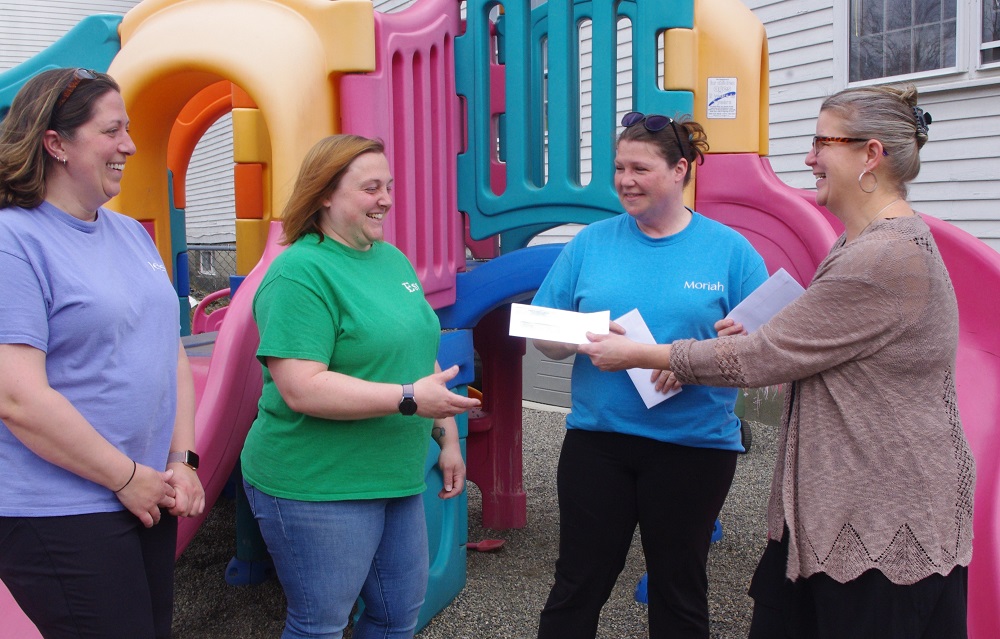 BRATTLEBORO — Jessica Corbeil views the check she received via the Child Care Counts Coalition in Windham County initiative as “a really nice thank you.”

“It was pretty fabulous,” said Corbeil, a teacher at West Bee Nursery School in West Brattleboro who has been in the field for about 20 years. “It was really nice to feel valued, you know, for all the hard work we early educators do every day. It certainly isn’t a job where you make millions of dollars but it has its own rewards and that’s why we all do it. It was nice to have a little bit of compensation.”

Through a fundraising effort, the coalition raised $54,150, with $25,000 coming from Turrell Fund grants, $14,575 from community members, and a Thomas Thompson Trust match of $14,575. An application process resulted in 115 full-time teachers getting $420 each, 22 part-time and federal Head Start program teachers getting $210 and public school educators getting a $50 Visa gift card. Public school programs had been excluded because teachers tend to make higher wages than other early learning programs.

“It was a great feeling to hand these teachers a check,” said Learey, who initiated the coalition in 2018 and serves as executive director of Winston Prouty Center for Child and Family Development. “They were really happy and it was really fun. It made my week, maybe my month.”

Corbeil said she doesn’t have any specific plans for the extra money at the moment.

“We’re sort of stashing it away right now as a buffer in case we need it,” she said.

Learey envisions the checks being used for fixing a car or covering increasingly high gas prices, saying that “small amounts of money can make a big difference sometimes.”

She said the Elizabeth Christie Fund, established for this effort and named for a local woman who advocates strongly for the field, will continue to serve as “a vehicle for supporting our mission of maintaining and adding child care slots in Windham County.”

“I think it’s meant to be flexible and responsive to whatever needs might be happening in the community,” she said.

When the fund initially started, its aim was to help retain child care workers. Learey called the checks “a Band Aid to offer appreciation and let people know how much we appreciate them.”

The coalition’s next project is anticipated to be a series of webinars or videos sharing information about opening or expanding child care programs. That’s a way to add much-needed slots in the area, Learey said.

“We have classrooms closed and not enough people to work,” she said.

Moriah Carney, director and lead teacher at West Bee Nursery School who has been in the field for more than 20 years, described being “really impressed by how our community valued us so much.”

“A lot of the times, we get things that come down at a state level but this was really heartwarming to have our community recognize how hard all the early educators work and this is one of the first that I can remember where it’s been a community initiative,” she said. “It was a little bit of a tearjerker. It felt so good to receive some funds for all the work we had to do.”

Carney recounted how throughout the pandemic, those in child care continued to work tirelessly.

“It’s been extremely tough,” she said. “We wear so many hats as early educators, we had to take some breaths and just live one day at a time to do the very best we could to survive.”

Carney said the pandemic “really solidified how important our role is at a state level and at a community, and that we truly are a piece of the backbone that has our economy going strong. And because of that, it seems like our legislators are really listening to our pleas. We need higher wages. We need benefits.”

Giving a “huge shout” to all the supporters of the coalition’s fundraiser, Carney said she hasn’t decided exactly how she’ll use the money but it will definitely be something for her family. She suggested the potential for a camping or road trip or something to reconnect as a family after working extra long hours.

“My children, I know, have been put on the backburner at times so I can do the job that’s in front of me,” she said.https://fa8e8f9910328eb6affc8534cd0382e9.safeframe.googlesyndication.com/safeframe/1-0-38/html/container.html

Jessica “Essy” Farquhar, teacher assistant at West Bee Nursey School who has been in early education on and off since 2007, said it means a lot to her to “feel that appreciation from the community.” She plans to use the money to take her family camping.

“You can be working on something with a child and just see that lightbulb go off and see the pride on their face,” she said. “It just makes all the hard days worth it.”

Learey said it’s nice to close the fundraising campaign and “tie a bow” on the project. She wishes a little more money could have been collected for the effort but said she’s proud of the amount raised.

“I feel like our community really did show up and support early educators and realize how important they are,” she said.

Marty Cohn, coalition member and public relations professional, suggested the project could be emulated in other communities.